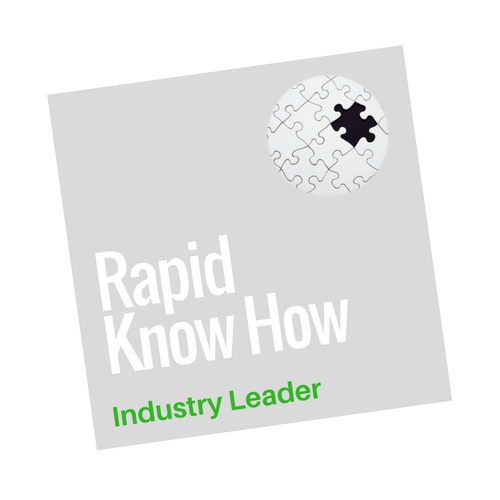 Most would-be industrial gas companies started with the same challenges of market development or penetration and production and delivery.

The most successful companies will have found ways to generate enough cash flow to cover operating expenses including working capital and to invest in new production and distribution facilities.

In the early days, the successful companies will have held a tight rein on expenditure and set rigid financial targets for investment.

The classic example is Leonard Pool who founded Air Products and recognised that selling the output from a dedicated onsite production plant to a blue chip customer by contract for 15 years would allow a bank to offer his company a loan at reasonable rates.

The loan could then be used to build the plant and the cash flow from a well-executed project would reduce the borrowing needs for the next project.

This view of onsites is now commonplace but in the early years of Pool’s company it was essential to survival and growth.

You also need a bit of luck and the US governments need during and after the Second World War certainly helped the US-based company grow rather than “off-shore” companies.

Similar innovative niches helped found and grow the other major industrial gas companies and in their early days they survived by tight control and clear financial objectives.

If we fast forward to the start of the 1990’s we see a much larger group of major companies than today and a period of technology-induced economic growth that appeared to be unstoppable.

Best Performing Companies in the 90ies

At the beginning of the 1990’s the best performing company, in terms of EBIT, was Air Products running at about 18% of revenues and the worst was Nippon Sanso (now Taiyo Nippon Sanso) at around 6% but a conglomerate basically serving the Japanese market and Airgas at around 9% average serving only the US Cylinder gas market.

You will recall that in the early “naughties” there was a minor recession and the effect on the various companies was interesting.

In the early nineties, there was an overoptimistic level of capital expenditure by many companies breaking away from the former conservative view.

The capital required to meet market growth and replace outworn equipment for any company depends on the structure and markets of the company.

Onsites require most CAPEX and package gases least with bulk somewhere in between.

Obviously this does not include the gain in market share, but all companies cannot gain except slightly by converting plants owned by the end user to onsites.

What the graph clearly shows is a significant overinvestment generally followed by panic and underinvestment. 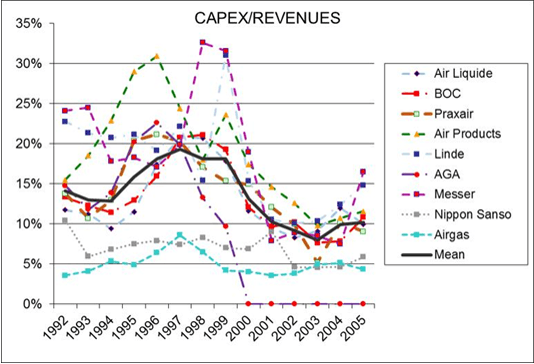 Some are worse than others;

The consequences of the failure to show consistent financial strategy were shown in the share prices and their impact on the durability of the companies as independent entities. 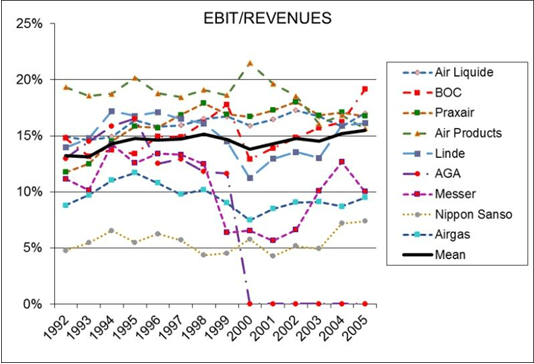 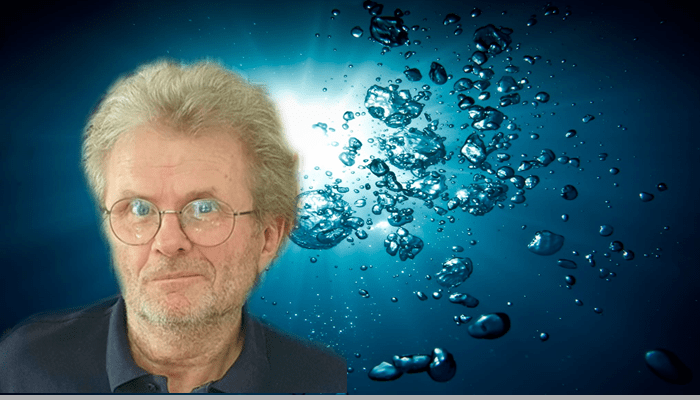 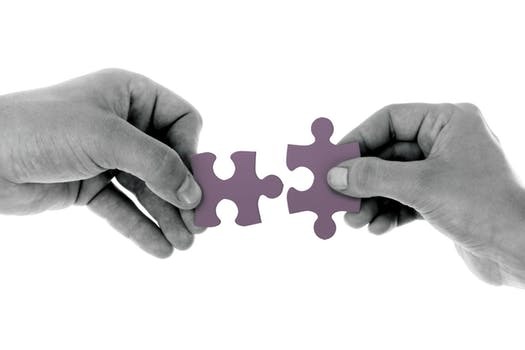