2)    Location of Plant – proximity to end-users

High quality carbon dioxide sources are seldom located near the centre of the market for carbon dioxide. However, a high quality source somewhat further from end-user locations may more than justify the additional distribution costs.

More than 65% of merchant carbon dioxide is used in the food industry for food preparation and in the production of beverages. Rigorous national standards and tight quality control procedures are now common in nearly all regions to avoid product contamination.

5)  Price of Carbon Dioxide – Ever Lower

The use of carbon dioxide in carbonation of drinks has competition from the larger producers own production but has only market competition for smaller users. The use of carbon dioxide as a refrigerant is more price sensitive because there are many other competing technologies such as liquid nitrogen, which gives a better product, and mechanical refrigeration which has lower operating expenses. Since the major volumes are to large users this keeps prices in check.

2) Carbon dioxide Suppliers to the Market

The carbon dioxide market was originally developed by companies outside of the usual industrial gas business, but gradually synergies with other gases have led to all of them entering the market in the last 35 years. Some, like Air Products have been in and out of the market but are now firmly in. Others, like Praxair, have started vertically integrating the business by buying hospitality suppliers.

Figure below shows the market split by production volume. 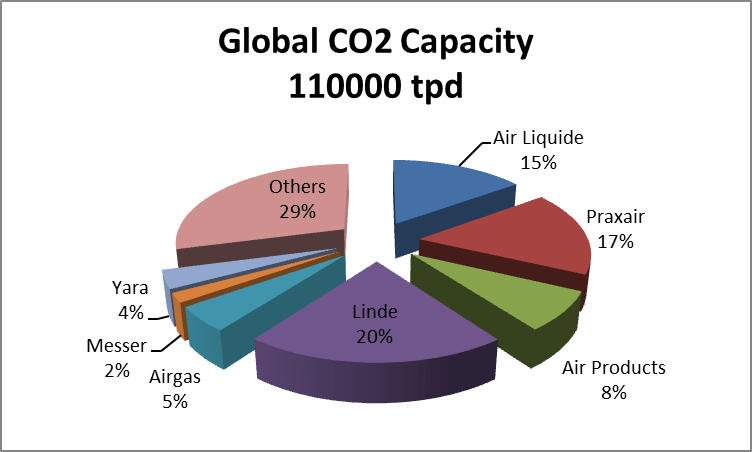 The North American market is the largest market for merchant carbon dioxide and reached 27550 mt/d in 2013, which is 53% of the global market.

The European market, the next largest is significantly lower and totalled 10850 mt/d in 2013 which is 21% of the global total

The world market for carbon dioxide is valued at about $2.9 billion (2013)

Becoming The B2B Leader – Creating Your Business Model in One Day